The 18th edition of the Hankook 24H DUBAI, CREVENTIC’s flagship event every new year, looks set to be another star-studded event in 2023 with almost 90 cars already registered for the 24-hour endurance epic on 13-14-15 January.

With three months left to go before the green flag drops, the 2023 24H SERIES powered by Hankook season opener, held around the 5.39km Dubai Autodrome for the 18th consecutive time since 2006, has already drawn enormous interest from teams representing 22 different nations around the globe. A tantalising enough prospect as that is, the provisional entry list, featuring as it does more than two dozen former event class winners, already boasts 14 different manufacturers with more expected to follow.

Entries continue will continue to be accepted at 24hseries.com and via CREVENTIC directly at [email protected] and/or +31 485 471 166.

Having taken victory as ‘Belgian Audi Club Team WRT’ in 2016, and in a collaborative effort with Saudi Arabia’s MS7 in 2022, WRT will by eying its third win in 2023 with two as-of-yet unspecified GT3 machines.

The Haupt Racing Team (registered as HRT), the eponymous outfit of three-time event winner Hubert Haupt, has confirmed two Mercedes-AMG GT3 for Dubai. Both of the German outfit’s entries finished inside the overall top five at the 2022 edition – the #4 AMG leading home the sister #777 Mercedes in 4th and 5th respectively – one year on from the team’s overall podium spot and GT3-Am class win.

Intriguingly, another former event winner, Liqui Moly Team Engstler, transitions to the GT3 class on its 24H SERIES return having taken TCR victory in Dubai on its last entry in 2018.

SunEnergy1 by SPS automotive performance, a former A6-AM class winner in 2018 as well as an overall podium finisher in 2022, will be keen to repeat its past successes. As, no doubt, will MP Motorsport, a GT3-PRO/AM and GT3-AM winner at the event in 2022 and 2020 respectively.

Across in the 992 class, competition doesn’t get much tougher than Black Falcon. The record-setting five-time outright winner of the Hankook 24H DUBAI returns for 2023, doing so with a Porsche 992 GT3 Cup for the first time. 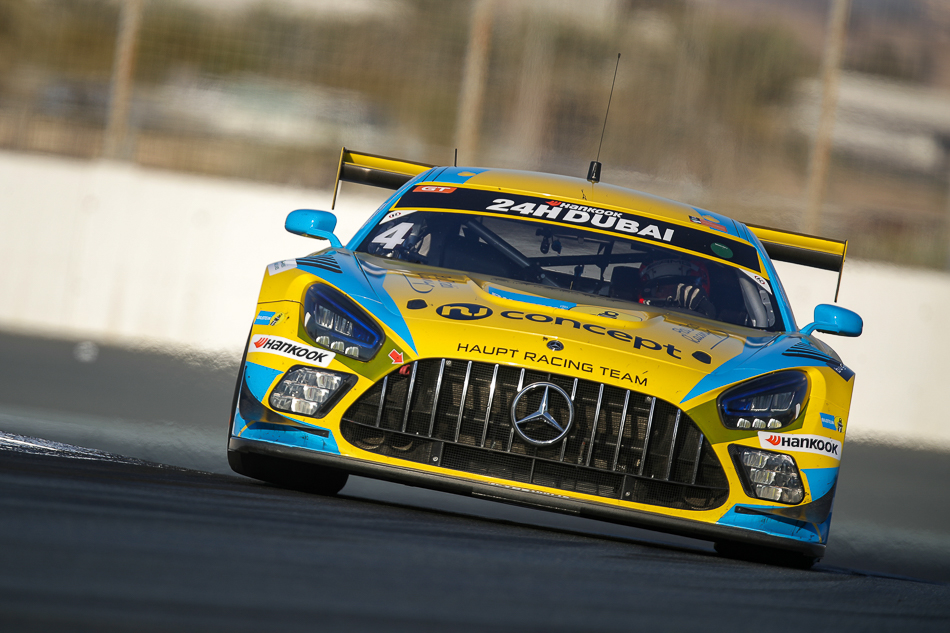 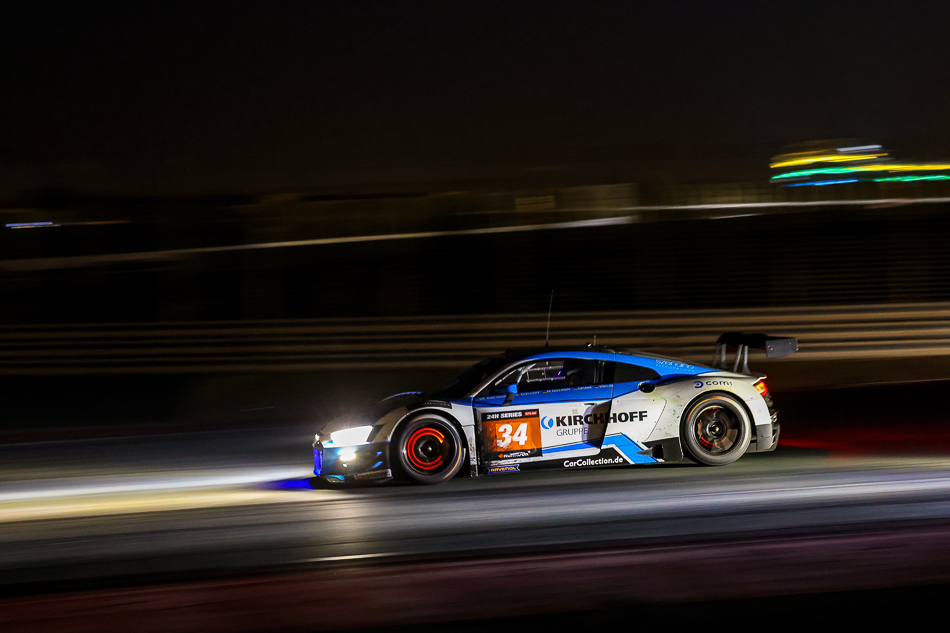 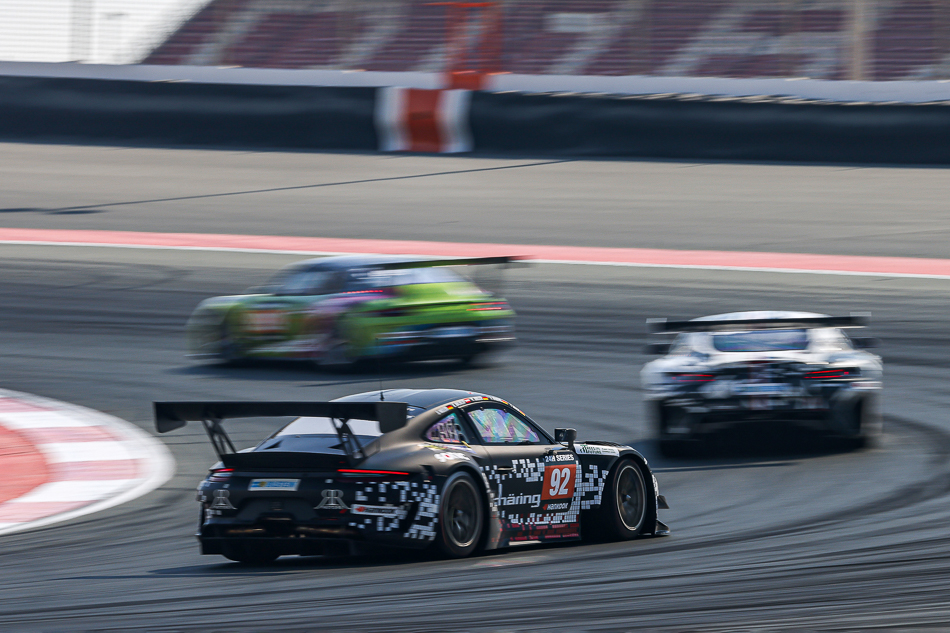 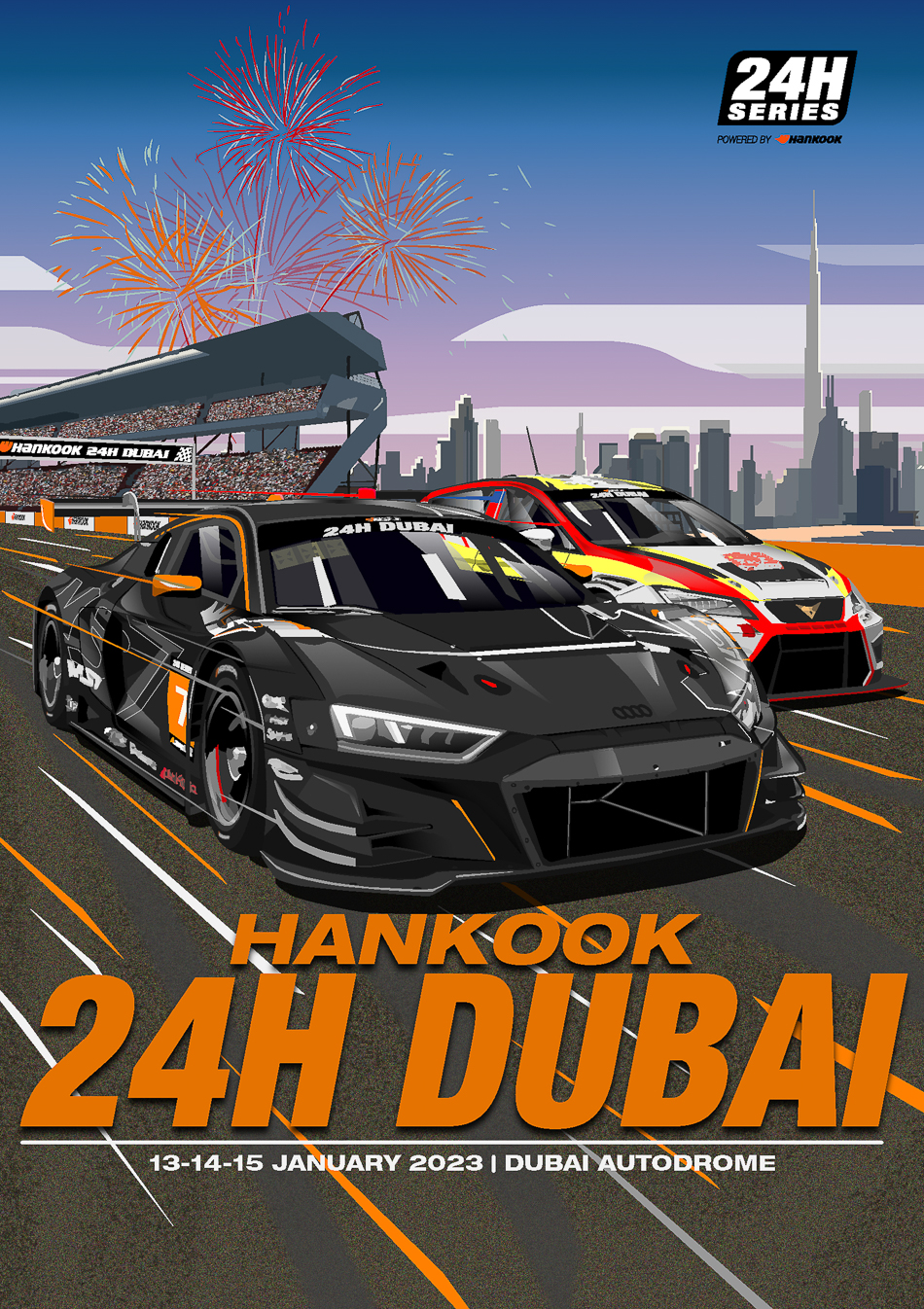 In 2021, Inception Racing by Optimum became the first team to lead the Hankook 24H DUBAI with a McLaren, a feat the former Hankook 6H ABU DHABI polesitter will no doubt want to repeat on its Dubai return. Fittingly, fellow Yas Marina podium finisher Saalocin by KoxRacing, helmed by GT specialist Peter Kox, will make its 24H SERIES championship debut in Dubai.

Following a successful, one-off GT4 outing at Portimão, Britain’s Ram Racing returns to the GT3 fold at the 2023 Hankook 24H DUBAI with its Mercedes-AMG GT3. Barwell Motorsport will hope to remedy poor luck at last year’s season-opener with its Lamborghini Huracán GT3, while Poulsen Motorsport, which brought a seven-year series hiatus to a close in Barcelona, lines up its BMW M4 GT3 once again.

Huber Racing, an established runner in CREVENTIC’s all-Porsche category, twins an entry in the 992 class with a GT3-entered Porsche 911 GT3 R. Among the German team’s biggest rivals will be fellow Porsche runner Grove Racing, an entry supported by New Zealand’s Earl Bamber Motorsport.

Following an impressive run in 2022, which included an outright podium finish at Hockenheim, Lithuania’s JUTA Racing returns for another 24H SERIES campaign with its Audi R8 LMS GT3 EVO in 2023. Examples of which are also set to be used by the SAINTéLOC Junior Team and Attempto Racing, both of whom will be hoping to secure their first outright event podium.

Getspeed Performance and Zakovski | Van Ommen from Germany, Belgium’s HAAS RT, and Britain’s 7TSIX will make their 24H SERIES debuts in the GT3 class, three of which will do so with multi-car line-ups. Zakovski for instance has registered Mercedes-AMGs for the GT3 and GT4 categories, while two McLaren 720 GT3s will race under the 7TSIX banner.

The UAE’s own Dragon Racing, a four-time winner in GT4, GTX and A6-AM as well as an outright podium finisher in 2015, is readying two Mercedes-AMG GT4s for its home event, 10 years on from its maiden outing.

Fellow former class winners AtlasBX Motorsports and Simpson Motorsport have similarly registered entries in the GT4 class. The South Korean team, the GTX event winner in 2020, will also run a Mercedes-AMG GT4, while the British outfit, which took prototype wins in Dubai in 2018, moves across from the TCE division with a new BMW M4 GT4.

Fellow BMW customer Century Motorsport took two spots on the GT4 podium in 2020, and returns with two M4 GT4s for Dubai, one in association with America’s RHC Jorgensen-Strom for the second year in a row. Amazingly, the SP3 class winner in 2017 has yet to finish outside the category top four since its maiden Hankook 24H DUBAI outing in 2016.

Sweden’s ALFAB Racing returns to Dubai for the first time since 2018 with its tenured McLaren 570S, while series debutants Speed Monkey's lines up for its debut with an Aston Martin Vantage AMR. RENNTech Motorsports, one of America’s longest-running AMG customers, is set to compete at the inaugural Hankook 12H KUWAIT later this year, and has also entered a Mercedes-AMG GT4 for the Floridian team’s maiden outing at the Dubai Autodrome.

Alongside the return of its GT3-spec Huracán in the top division, reigning GTX Teams’ ‘European’ champion Leipert Motorsport also begins its title defence with its Lamborghini Huracán Super Trofeo. Among its toughest opponents will be championship runner-up Vortex V8 and PK Carsport, the latter of which took GTX victory at the 2022 Hankook 24H DUBAI with its Audi R8 LMS GT2. razoon-more than racing rounds out the GTX contenders thus far, the Austrian team having confirmed a KTM X-BOW GTX for its maiden outing. 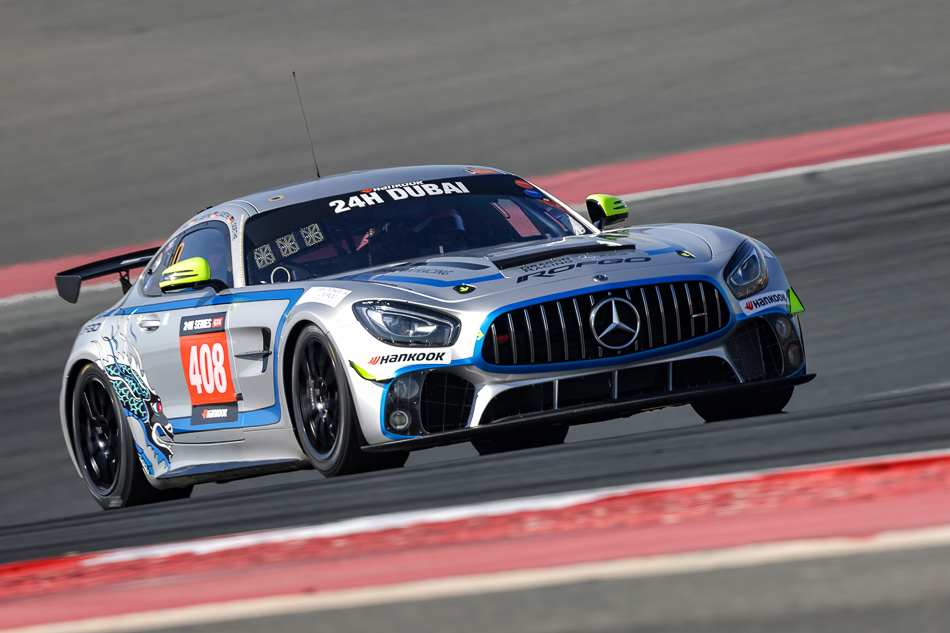 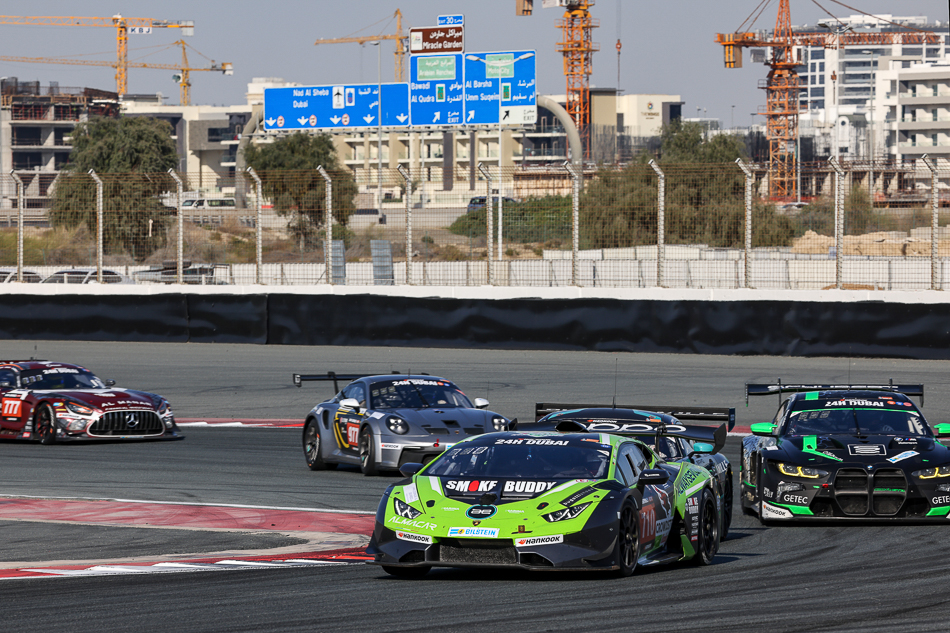 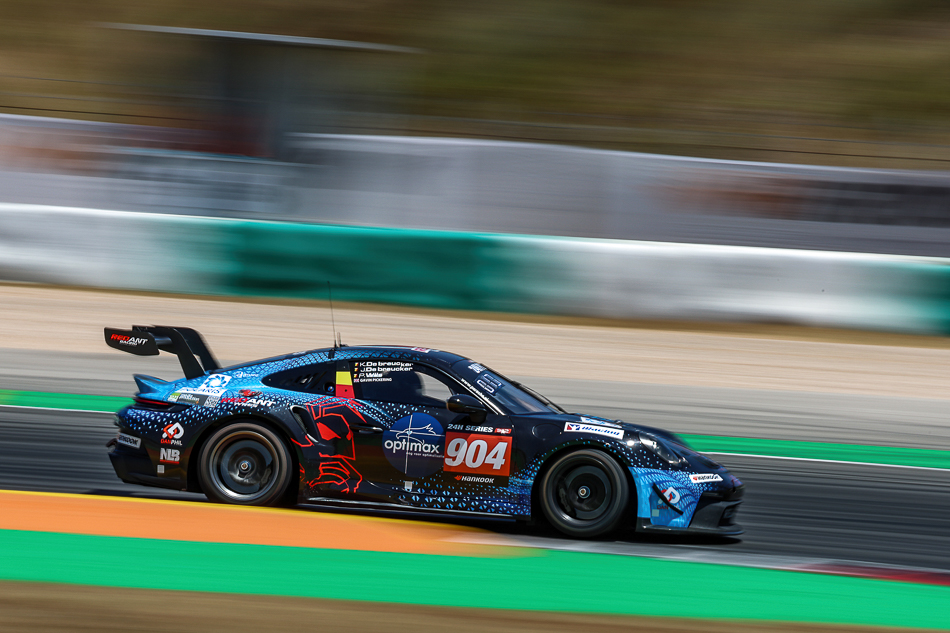 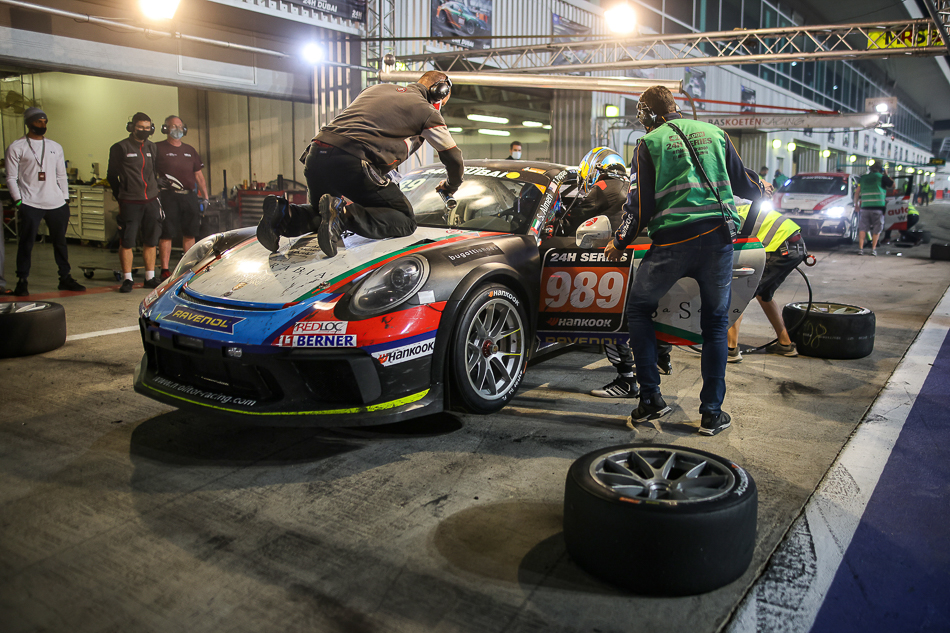 Newly-crowned 992 Teams’ ‘European’ champion Red Ant Racing will headline the 992 field. The Belgian squad, which has registered two 992 GT3 Cups for its second shot at the Hankook 24H DUBAI, is one of a stellar number of teams to have confirmed a multi-car line-up in the all-Porsche class.

Switzerland’s FACH AUTO TECH will look to repeat its 2018 class win at the event with one of its two registered Cup cars, while Germany’s MRS GT-Racing, after a one-year absence, will hope to take its eighth podium and/or win on its 11th event entry.

Among the most significant entrants will most certainly be HRT Performance. Having finished with three cars inside the top four (including the class win) in 992-AM in 2022, the German team has registered FOUR Porsche 992 GT3 Cup for its ninth Hankook 24H DUBAI with a further two potentially in the works.

Abu Dhabi-based RABDAN Motorsport will be gunning for a strong finish at the first of two home races with CREVENTIC in 2023, while Luxembourg’s SebLajoux Racing continues its association with former 991 and CUP1 champion DUWO Racing after a successful outing in Barcelona.

Rounding out the 992 entries so far, 2021 991 Teams’ champion Willi Motorsport by Ebimotors makes the step across to ‘992’ in Dubai with its latest generation Porsche GT3 Cup.

A three-time Overall TCE Teams’ champion in the 24H SERIES, as well as a TCR class winner of the Hankook 24H DUBAI in 2019, Wolf-Power Racing extends its line-up to two Audi RS 3 LMS’ for the 2023 edition as it resumes its rivalry with fellow TCR event winner (2020) AC Motorsport. The latter also represents the Ingolstadt brand in Dubai.

After securing a scintillating first series win at Spa-Francorchamps earlier this year, Holmgaard Motorsport will hope for similar success with its new CUPRA Leon Competición in Dubai. Also running a CUPRA, Hungary’s Zengő Motorsport, which made its maiden Hankook 24H DUBAI start way back in 2007, returns for its ninth event entry in January.

2020 Overall GT Teams’ ‘Continents’ champion Team Avia Sorg Rennsport makes an intriguing switch to the TCE division for 2023, doing so with a pair of Porsche 718 Cayman GT4 CS’ in TCX. The German squad will go head-to-head with LAMERA GT, a TCE front row starter at the 2022 event, which returns for 2023 in a collaborative effort with ‘Racetrack.’

France’s SK Racing, TCX-class winner at the 2022 Hankook 12H MUGELLO, makes only its third start with CREVENTIC in Dubai with a Ligier JS 2, while Denmark’s Sally Racing, a 24H SERIES regular since 2016, will be looking to secure its first event podium since 2017.

Full details regarding the 2023 Hankook 24H DUBAI are available HERE. 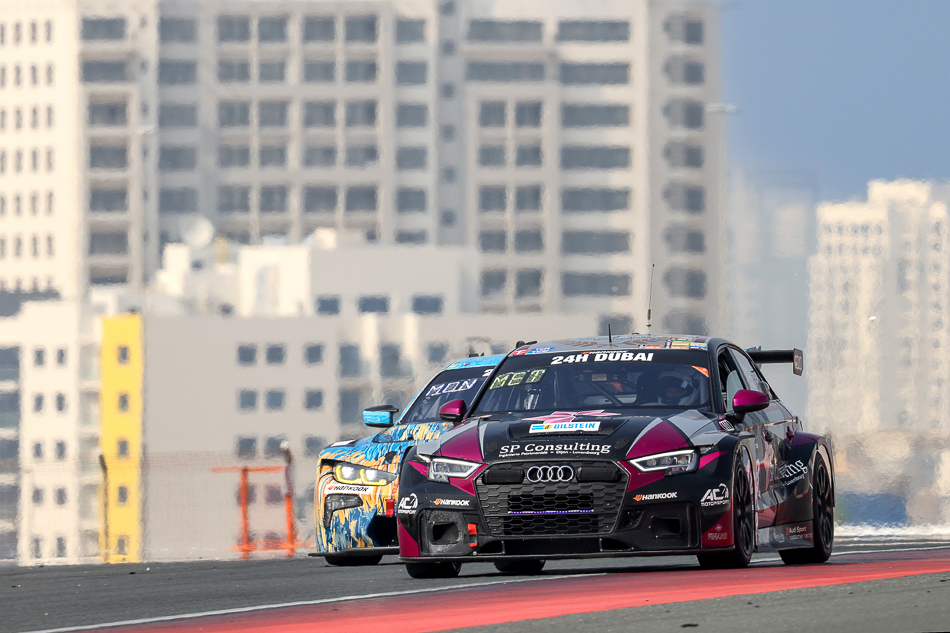 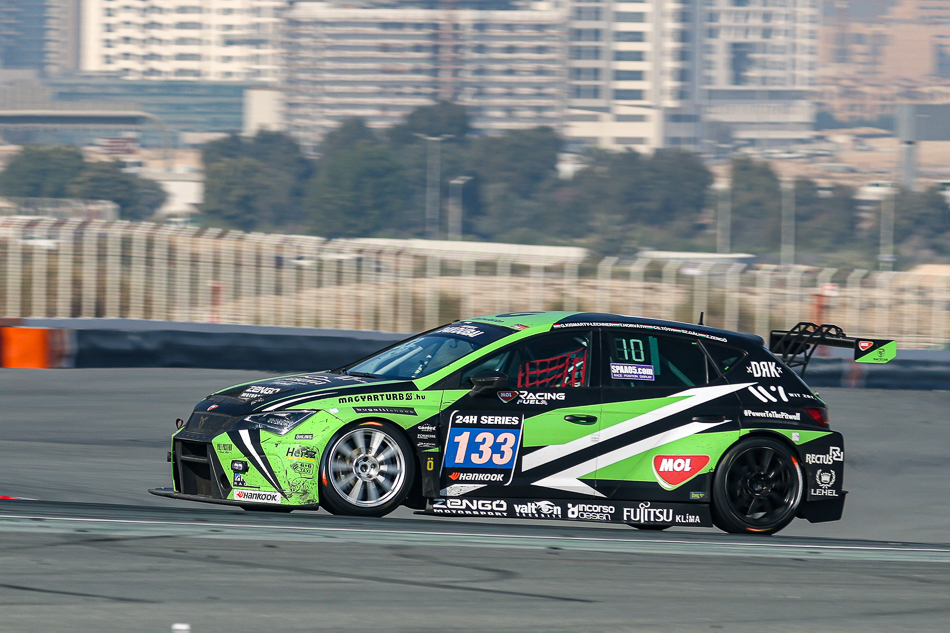