Having taken its second overall in the 24H SERIES at the inaugural Hankook 12H KUWAIT, CP Racing not only secured the GT Championship of the Continents but also moved to the head of CREVENTIC’s brand-new Middle East Trophy.

Having sealed this year’s Championship of the Continents at this past weekend’s Hankook 12H KUWAIT, event winner CP Racing has now moved into the lead of both the GT3 and GT3-AM standings in CREVENTIC’s brand-new Middle East Trophy.

CP Racing, a two-time GT3-AM Teams’ ‘European’ champion as of Barcelona this year, secured its first outright title in the 24H SERIES at Kuwait Motor Town, and became the fifth different overall GT winner of the Championship of the Continents in the process. In doing so, the American team now heads into next month’s Hankook 24H DUBAI at the top of the Middle East Trophy standings.

Team owner/driver Charles Putman, and teammates Charles Espenlaub, Joe Foster and Shane Lewis were also celebrating their second overall win in the 24H SERIES at Kuwait, their first having come at the Hankook 24H PORTIMAO earlier this year.

“Overall win in Kuwait!” a jubilant Shane Lewis explains. “It was edge of your seat and so exciting the entire race. We pushed the Mercedes-AMG GT3 so, so hard. History books will show we are the first-ever winner [of the Hankook 12H KUWAIT] and I am so proud to be on the top step and part of this amazing team. Exhilarated and exhausted, all at the same time!”

Like the 20 other teams on the grid, CP Racing went into the Hankook 12H KUWAIT with no prior racing knowledge of Kuwait Motor Town, but still fell just 0.032s short of qualifying on the front row of the grid. Despite losing a place on the opening lap, the American team’s focus on consistent pace meant Charles Espenlaub continued to keep the GT leaders in his sights during the opening stages. Deft use of Code 60 pit strategy on top of that meant the #85 Mercedes-AMG GT3 had moved into the lead by lap 57, shortly after the second hour. 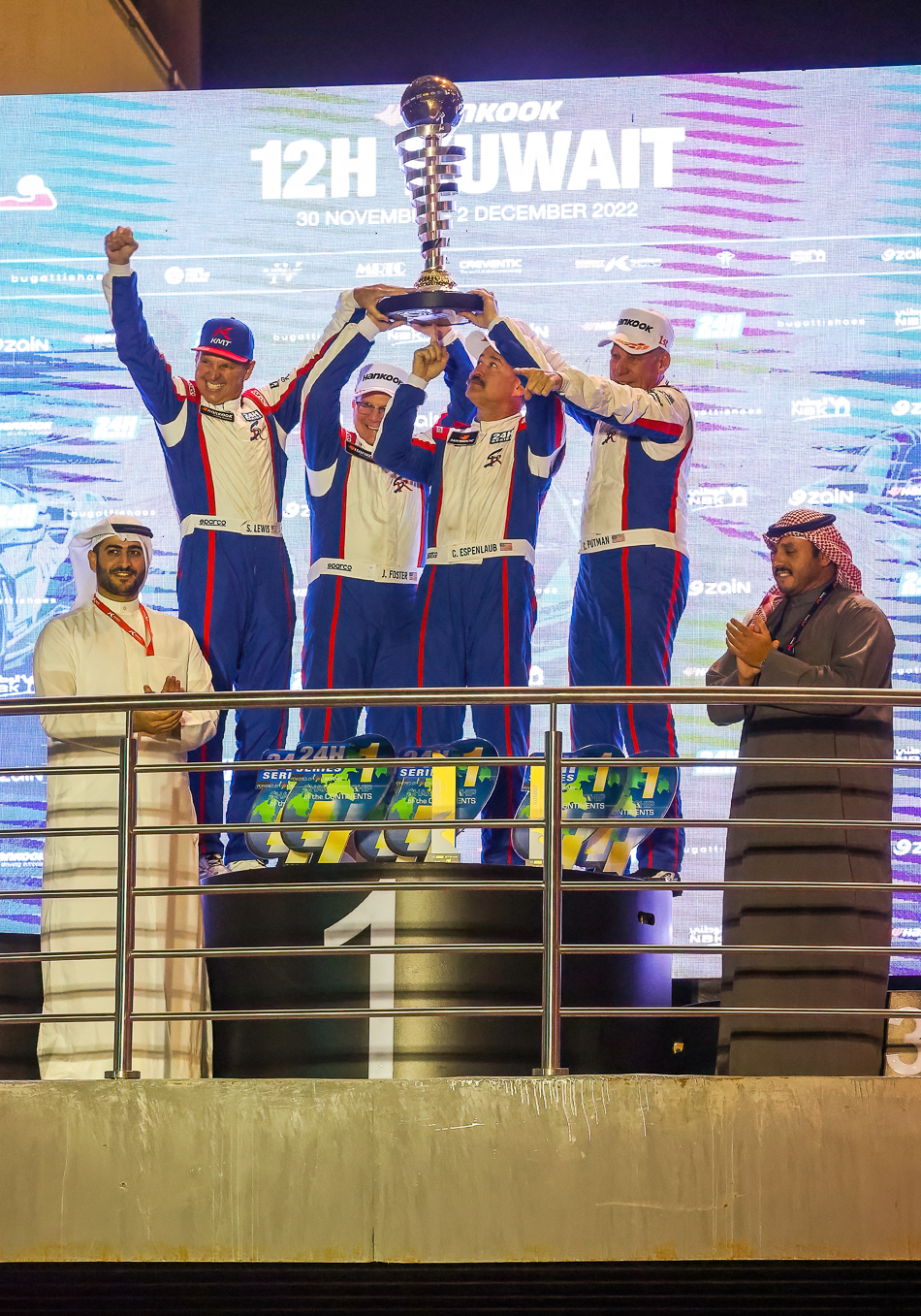 Thereafter, the lead repeatedly bounced between CP Racing and Team GP-Elite, the latter at one stage – courtesy of Daan van Kuijk – retaking the lead from Espenlaub on-track.

A shot at victory against the faster lapping GP-Elite Porsche 991 GT3 R appeared to be over with heading into the final three hours when Charles Putman was involved in a bizarre incident with RABDAN Motorsport’s Enrico Fernando Fulgenzi. Approaching turn 20, Putman put another lap on Fulgenzi only to find, on the sprint down the main straight, the Porsche Cup car was attempting to unlap itself into the fast, left-handed turn one. Left with no room on the inside and pushed wide onto the marbles on the outside, the Mercedes spun off-track and into the gravel, handing the lead back to Team GP-Elite.

“I had just passed a Porsche Cup car coming onto the front straightaway, and, believe it or not, those cars are faster than us [down the straights] with the lack of aero,” Charles Putman explained to radiolemans.com’s Nick Daman shortly afterwards. “I saw him move out as we approached turn one and thought, ‘no way he’ll try that, we’re way too fast for him to stick.’ And he just kept coming! He finally threw it in there, and then he went for the brakes when he realized he wasn’t going to make the turn, and that drove me out all the way into the nasties.

“And then I made things worse! I got out there, and of course the car spun, and I thought, ‘I’m going to be fancy here. I know there’s nothing out there to hit. I’ll just the car come around, pull a gear, and drive out.’ And I let it come around into the gravel, so I was stuck!”

CP Racing’s shot at victory appeared to be over, only for a “mechanical issue” – suspected to be gearbox related – brought the Team GP-Elite Porsche to a halt on-track at turn eight with only 45 minutes of the race remaining. Once back in the lead, the #85 Mercedes-AMG GT3 Evo held its advantage all the way to the chequered flag, eventually leading 213 of the completed 323 laps.

Now on 40 points in the standings, CP Racing is set to continue its Middle East Trophy campaign with the Hankook 24H DUBAI on 13-14-15 January and the Hankook 6H ABU DHABI on 21-22 January. Having also taken class wins in Kuwait in GTX, 992, 992-AM and GT4, Leipert Motorsport, Red Camel-Jordans.nl, HRT Performance and Century Motorsport respectively will be also be looking to add to their points tallies in Dubai.