·      Fight for GT victory goes down to the wire between polesitter Pure Rxcing and Herberth Motorsport; HAAS RT less than three seconds further back.

ABU DHABI (21 January, 2023) – Pure Rxcing has taken a fighting maiden win in the 24H SERIES at the 2023 Hankook 6H ABU DHABI in a phenomenal grandstand finish.

The Pure Rxcing Porsche 911 GT3 R (#911, Aliaksandr Malykhin / Joel Sturm / Harry King) started its afternoon strongly at the Yas Marina Circuit by securing its first pole position in the 24H SERIES powered by Hankook. The Lithuanian-entered team then carried that momentum into the race proper by leading the early stages comfortably.

Ironically, the pace of Harry King – who pulled out almost 20 seconds during the opening hour – came to naught when the first of three Safety Car periods (used for the first time at a CREVENTIC event) was called, neutralizing and bunching the field back up again. Pitting shortly before the second safety car period though would prove crucial, a strategic call that gave Pure Rxcing enough of an edge over its early race rivals – including the HAAS RT Audi R8 LMS GT3 EVO II – heading into the second half of the event. A similar strategy executed by the ‘sister’ Herberth Motorsport Porsche 911 GT3 R (#91, Markus Neuhofer / Felix Neuhofer / Alfred Renauer / Robert Renauer) cemented a Porsche vs. Porsche battle for the closing stages.

In a nail-biting finish, and with the Herberth Porsche having moved ahead after the final round of pit stops, the Pure Rxcing Porsche, which also had a 10-second penalty hanging over it for overtaking another car off-track, closed down the gap to the leader, made the pass for the top spot on-track, and extended its lead to more than 17 seconds. All within the closing 15 minutes.

After an amazingly close fight, and after Pure Rxcing’s penalty was served post-race, both Porsches were split by just 7.226 seconds in the final results. 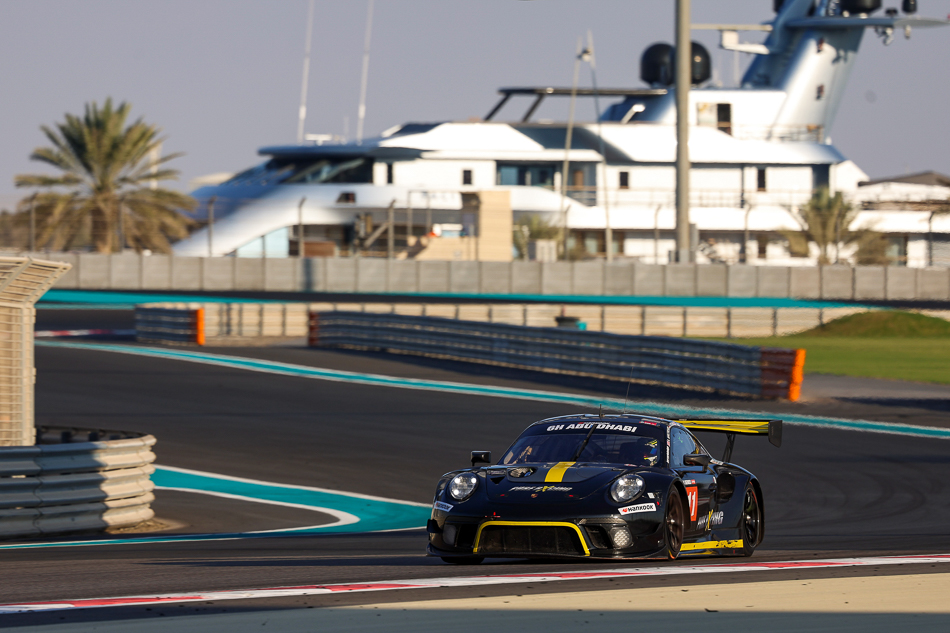 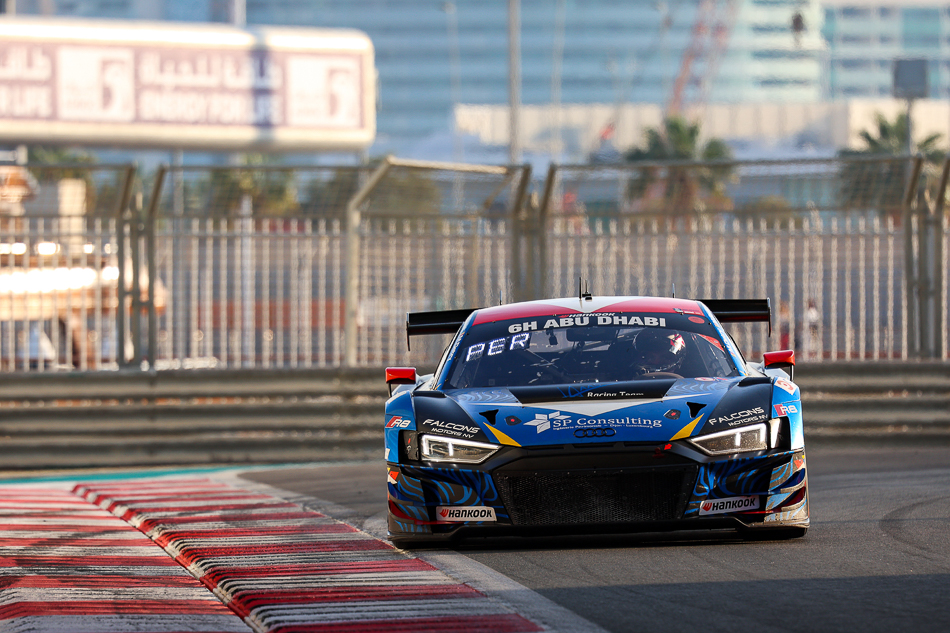 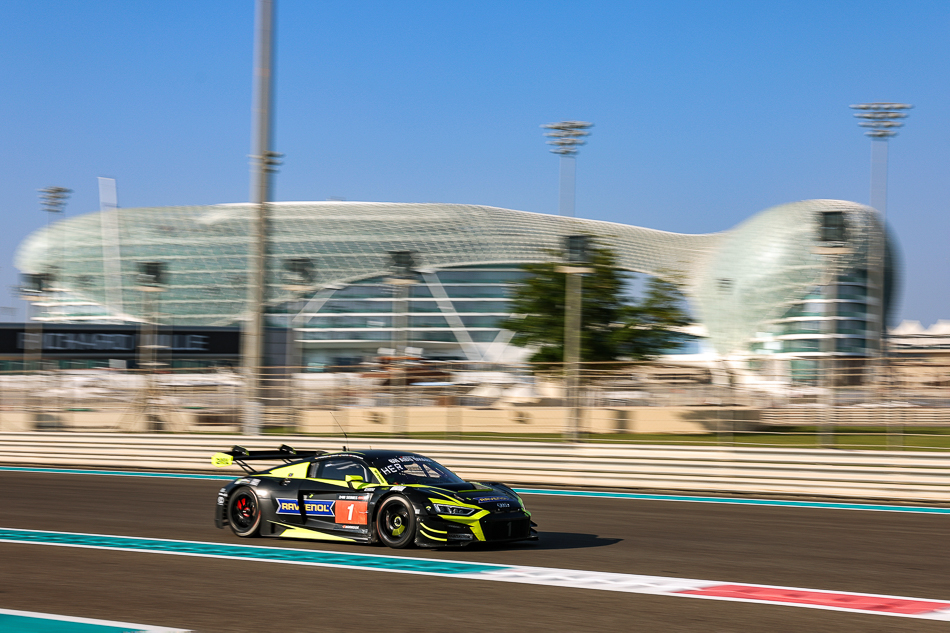 Pure Rxcing completed 165 laps of the 5.281km Yas Marina Circuit, just one shy of the 166 laps completed by Baron Motorsport en-route to victory at the 2022 event.

Herberth Motorsport continued its excellent return to form with 2nd overall at the Hankook 6H ABU DHABI after a mighty charge from 19th on the grid. The results mean the Bavarian team secures the GT3 Teams’ title in CREVENTIC’s new Middle East Trophy.

Despite being bested to GT3 Teams’ honours by Herberth, the HAAS RT Audi R8 LMS GT3 EVO II (#21, Stéphane Perrin / Mathieu Detry / Maxime Soulet) rounded out another impressive weekend with CREVENTIC in 3rd, the Antigua/Belgian team securing the fastest lap – a 1m 54.144s, set by Maxime Soulet – en-route to the podium. Incredibly, at one stage, the former Bentley works driver set a fastest lap of 1m 54.492s, identical to the fastest lap teammate Mathieu Detry had posted during the second of three qualifying sessions earlier this afternoon.

Red Camel-Jordans.nl (#909, Ivo Breukers / Rik Breukers / Luc Breukers / Fabian Danz) put memories of a disappointing Hankook 24H DUBAI behind it with a robust drive to 992 victory ahead of the highest of the 992-AM runners, HRT Performance (#928, Jim Rautiainen / Miika Panu). The latter had been locked in-battle with the sister QMMF by HRT Thuraya Qatar Porsche 911 GT3 Cup (#929, Abdulla Ali Al Khelaifi / Ghanim Al Maadheed / Ibrahim Al Abdulghani / Julian Hanses) for much of the event only for the latter, brutally, to suffer terminal brake problems with only 20 minutes of the race left to run.

So impressive was the form of the 992 field, five of the eight Porsche 992 GT3 Cup cars entered for the event finished inside the overall top 10.

The ARC Bratislava Lamborghini Huracán GT3 (#44, Miro Konopka / Andrzej Lewandowski) ran a consistent race – from 20th on the grid – to finish 10th, the Slovakian team securing GT3-AM race victory in the process. One lap further back, the JR Motorsport BMW M6 GT3 (#12, Ted van Vliet / Max Weering) was on course to finish inside the top 10, but lost more than two minutes to a time penalty for overtaking during a Safety Car period. 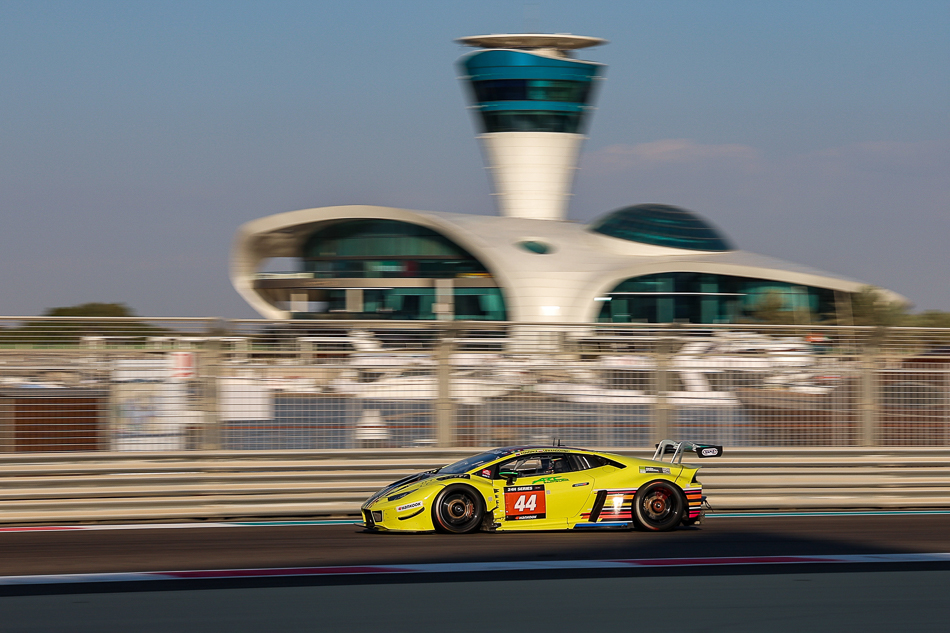 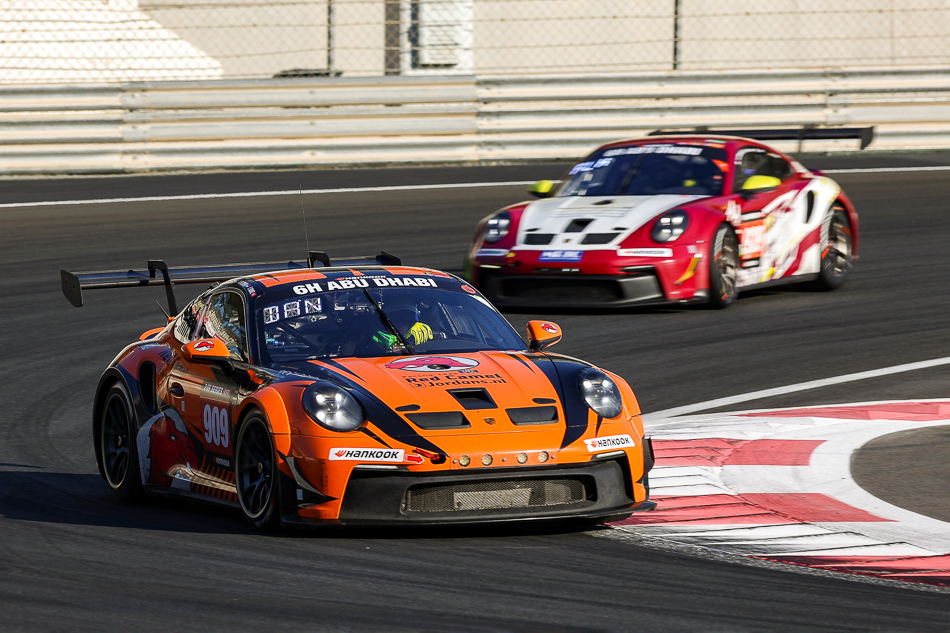 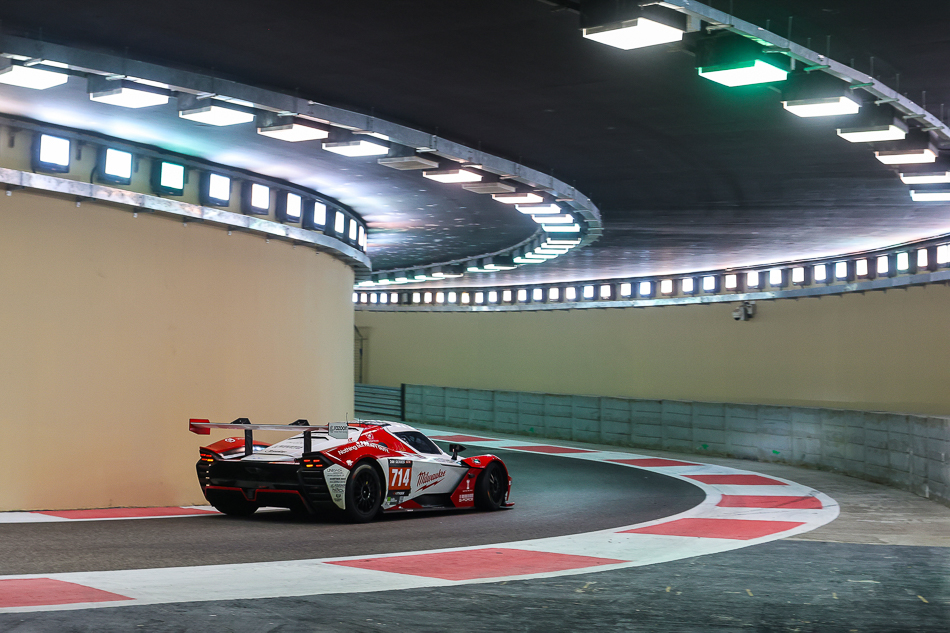 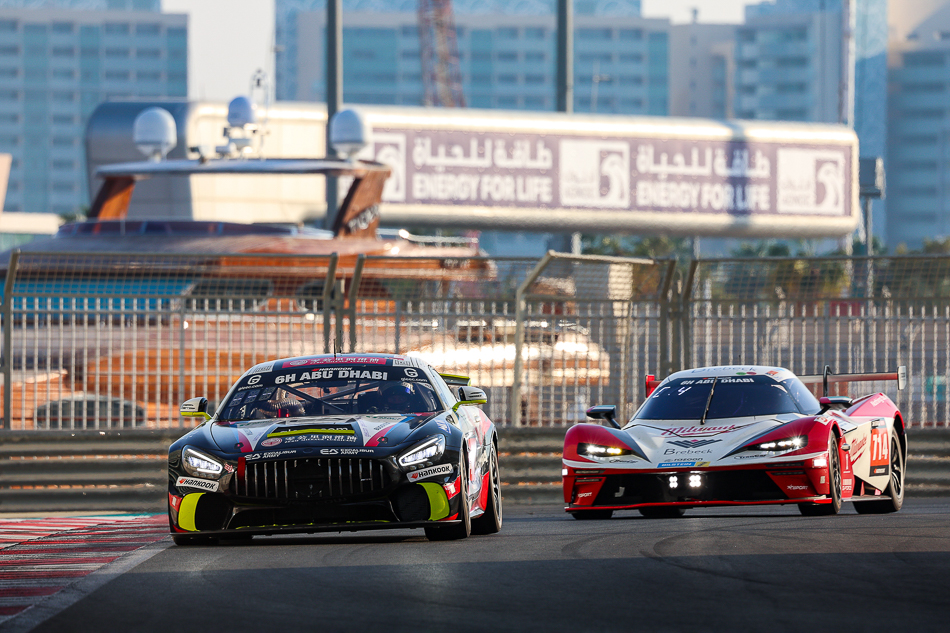 The Buggyra ZM Racing Mercedes-AMG GT4 (#416, Aliyyah Koloc / Adam Lacko / David Vrsecky) made a victorious return to the 24H SERIES with GT4 victory, less than a week after Aliyyah Koloc’s completion of the Dakar Rally. Having been delayed early on when its fuel filler cap refused to close, the Ram Racing Mercedes-AMG GT4 (#405, James Thorpe / Philip Quaife / Philip Keen) eventually finished a bittersweet 2nd in-class after a strong performance.

The Simpson Motorsport BMW M4 GT4 (#438, David Holloway / Vasily Vladykin / Carl Cavers), which had been battling Buggyra for the class lead during the opening hour, failed to finish after the British team was unable to replace a broken alternator belt.

The first of two AC Motorsport Audi RS3 LMS TCRs (#188, Marcos Costantini / Niels Ulrich Nyboe / Jonas Karklys) was rewarded for its efforts with 3rd in-class: the lead Audi, having already been repaired after a collision during Free Practice, lost more than an hour in the pits when its right rear suspension failed at turn five. The sister #199 meanwhile (Paul Sieljes / Mato Matosevic / Victor Moutinho) was eventually retired after the source of recurrent gearbox issues could not be found. 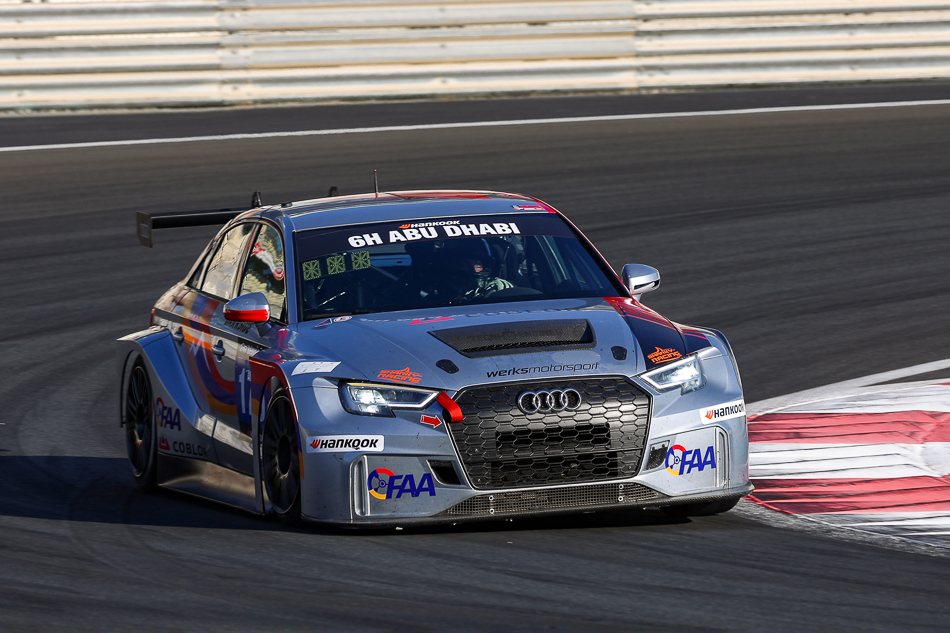 With CREVENTIC’s Middle East Trophy in the bag for 2022 / 2023, attention now turns to the European rounds of this year’s 24H SERIES powered by Hankook, which is set to begin with the annual Hankook 12H MUGELLO at the Autodromo Internazionale del Mugello on 25-26 March. Further details regarding the 2023 24H SERIES calendar can be found HERE